The Sword And The Flame Scenario Collections Available Again 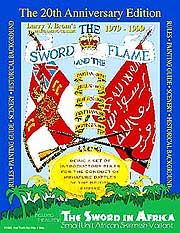 Zulu Wars - A question of scale

A few test paints for an old Zulu wars projects. I certainly do not want to repeat the error of having both 15 and 25 mm armies as I have with the Sudan so:- 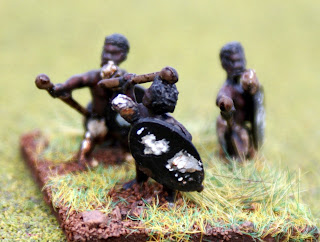 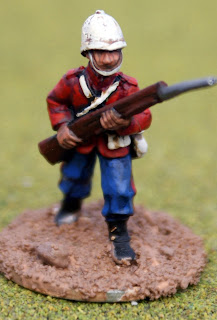 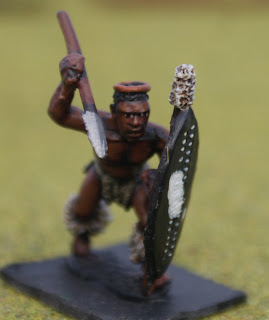 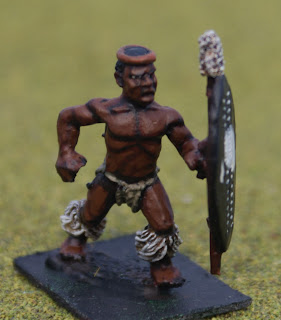 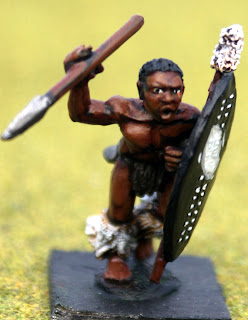 The Train
Setting – , 1884
The – Two cars of a British supply train have derailed. The forward part of the train, with casualties, has moved onto the major supply point to alert the Commander and activate a rescue force. The force is being dispatched with the mission of reaching the derailed cars and securing the immediate area at the rail embankment until a larger salvage force arrives. A platoon of mixed Naval Brigade and Camel Corps with a gun has been left with the cars. 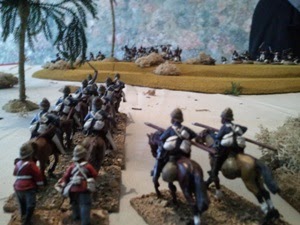 The – the small British force at the train embankment took too long to arrange their defences in a suitable manner. Lieutenant Morrow and 2nd Lieutenant Dorsey lacked the experience to organize their small force and the gun was poorly placed and had only half a platoon to protect its left flank. This was to eventually be their downfall. The relief force found the terrain hard going and the Scots and Hussars (21st Lancers) were delayed from their advance when a large Dervish force was spotted on the ridge running beside them. The Scots under Lieutenant McTavish took a defensive formation to protect the right flank of the rest of the advancing force. The Hussars under the command of Major Hedley rode in to disrupt the attacking ‘fuzzy-wuzzies’. Colonel Webster (commander of the initial relief force) marched (on horseback) with Lieutenant Lewis and the 1st Platoon (the ‘whites’) through the dense scrub. Lieutenant Darcy led the remaining platoon towards the derailment position. 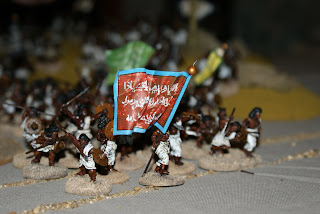 First to engage were the Hussars of the 21st Lancers. Unfortunately Major Hedley and his troopers found the ridge hard going and this effectively ended their charge into the advancing Dervish mob. Within moments they were surrounded and a pitched battle began. Even with the force of their charge gone they fought well but soon many of the horsemen fell to the spears of the Dervish. Trooper Jackson (the bugler) was the first to fall. Sgt. Harris was severely injured and the rest of the troop began to suffer casualties. Ultimately the wounded survivors were forced to retreat with Major Hedley the only man without injury. 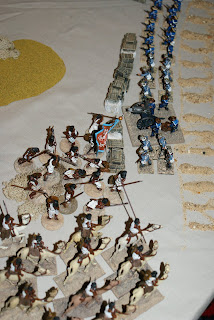 The Scots under the command of Lieutenant McTavish fared much better and easily held the attacking Dervish force at bay, slaughtering many in the process. McTavish was injured but the platoon held fast. 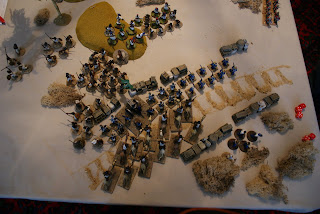 Colonel Webster and Lieutenant Lewis made it just past the main road that bisected the battlefield. They still had about half way to go to reach the stricken forces at the derailment but were forced into a defensive square formation when the line broke behind them as Major Hedley and the wounded 21st Lancers fled the battle. A group of skirmishing Dervish riflemen hid in some nearby scrubland on a low hill to the north and began to fire upon the hastily formed British square. Sgt. Anstey was killed, Lieutenant Lewis wounded and Colonel Webster, who had refused to dismount from his horse, was winged by a lucky shot from one of the Dervish marksmen. 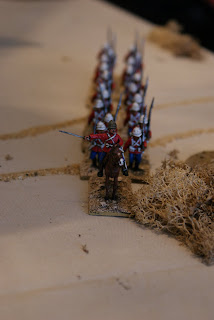 Lieutenant Darcy made the best progress coming within firing distance of the railway. The sight that greeted them was a terrible one – a huge swarm of Madhist warriors had surrounded the meagre British forces at the embankment and were butchering them to a man. The poorly placed gun had little effect on the masses of charging Dervish and a large group of camel mounted warriors had sliced through their left flank and attacked the defenders from the rear. It was not long until the desperate Naval Brigade and Camel Corps men were decimated along with their officers. 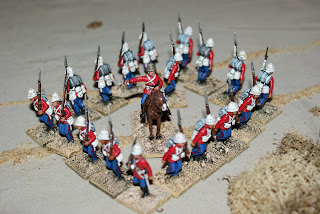 With the train and its supplies taken, the defenders slaughtered, the Hussars decimated and Colonel Webster injured it was decided there was no other course of action but to fully retreat to meet up with the oncoming salvage force and report the bad news back to General Gordon…
An alternate view...
(Read in appropriate Arabic accent)
"Dem bloody English, got no bloody idea. My Allah I will show the
wisdom of the great Warrior of the Desert.

We placed some nobody savages at the top of the ridge to lure the red
coats from their advance and it did, they all lined up in a nice line
and even sent some house dung sildiers after us by is Allah's wisdom
had forseen this and hid one of my many excellent bands of hot shot
sniperers there and another group of spear hurlers to attack the
horses flanks and they eat there fill of horse flesh that night and
picked to sand bleached red coated bodies clean of all things useful
including naughty butler looking through key hole pamphlet thing.

While the En'lish where wasting their blood in this diversion more of
my fine shoting snipperers had crept down the ridge and overlooked the
train and its defenders. Silly bleeder Englishman put big many shot
gun in the wrong place and my many hoards ran almost stright onto
their lines with out more than a few bloody specs among Allah's great
and furious army.

They moved the gun too late to do any good, and then left its flanks
open to the six legged beasts of my great camel cor! who slew left
and right and stright ahead all the way along the track eventually
coming out the other end like a train from a tunnel the meat the sanil
paced British forces. These Britishers they think the whole world is
one of their nice walled cities and when they get into trouble they
make silly little squre walls of men but my then my many guns of the
all seeing had no one else to shoot at and that man house could not
take so much one lead in one go and they fled like the cowrdly scaven
dogs they are..

Go back to your forgion Jeruselum you heven hounds and may the arse of
your tiny Queen grow ranceed with sand driven saws until she take back
these heven devils from our shores. Allah be praised, Allah be
merciful, Allah we did it!!!" 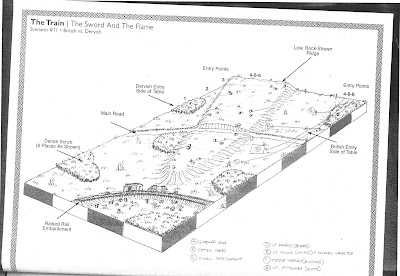 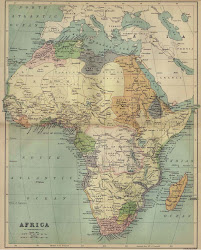 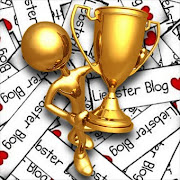